Welcome to the Interchange website. This site has been created by Brian Jaeger in order to help neighbors (Cannon Park, Ravenswood, Wisconsin Avenue Park) solve problems and get to know one another. We live near the Zoo Interchange, Wisconsin Lutheran College, and the Milwaukee Regional Medical Center, but we are neighbors more to each other than those large entities. Please use the contact form to volunteer to write articles or send correspondences.

Why This Neighborhood is Good

As the Zoo Interchange project progresses, the danger may exist for us to lose sight of why we complain about what is happening around us: we enjoy where we live and want to protect what we have. I was told by one neighbor to be careful not to master the art of complaining lest I forget the positives, so I want to write about some of those positives now and in future articles. Today, I want to generally describe why my family lives in the neighborhood.

Read more: Why This Neighborhood is Good

Trucks Destroy Roads More Than Most of us Think 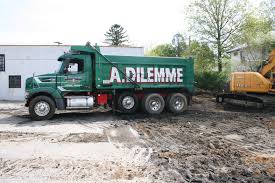 While there may not be much we can do about all the trucks rumbling up and down Bluemound Road, we can try to keep them off our side streets. It's also interesting to see what kind of damage those trucks are causing.

Research I have read indicates that a full dump truck will weigh in the neighborhood of 80,000 pounds, which is similar to a full 18-wheeler. This weight varies depending on material, but lets just assume each full truck is 40 tons, or 20 times heavier than a car. It seems logical that the truck equals 20 cars. However, wear and tear on roads is measured exponentially, which means the one truck is equal to 9,600 cars. I had to look that up for confirmation, but it appears to be accurate. This means that even while Bluemound seems relatively empty right now, each truck is doing the damage of a rush hour of cars, not to mention what happens to our side streets if a full load comes our way.

This also means that a car weighing 4,000 is roughly the same amount worse for our roads than a bike and rider weighing 200 pounds, which means one car is equal to over 9000 bikes on the road. Makes you think a bit. It also makes you wonder about who should be paying for roads and how, and whether or not Wisconsin Avenue should be bikes only as was floated back in the 1990s.

The one day that we had 20 documented trucks and probably closer to 40 (because we stopped paying attention) on 93rd Street was equal to having 190,000 to 380,000 cars passing our houses in one day. How many years did that shave off the useful life of the road? And consider that Bluemound is getting this kind of traffic daily.

I was actually a little surprised that at least one state has decided that trains make more sense than trucks because of all the road damage. (Be aware that many states conducted studies back in the 1950s about whether to build an interstate highway system, and those studies always resulted in states deciding highways were too expensive.) Wisconsin will be dealing with record road construction bills and diminishing gas tax revenue, so we may have some decisions to make , too. However, let's hope those decisions come after the Zoo Interchange is done and Bluemound Road is resurfaced.